Bart worked at PCLS as a community worker since 1984. He engaged in street level organizing with low-income tenants, roomers, boarders and persons who are without stable homes for over 35 years.

In the eighties, he played a strategic role in the organizing of a successful tenant campaign against a Toronto landlord converting apartments to hotels. In the nineties, he helped tenants organize several successful and prominent rent strikes. He was also active with the organizing of Toronto’s Street People’s Association for unstably housed Parkdale residents. Since the 1990’s and up to this past year, Bart has taken the lead at organizing the Rupert Memorial, in memory of ten rooming house tenants who died in a fire at the Rupert Hotel rooming house. The tragedy led to advocacy efforts and increased licensing of rooming houses that Bart was involved in for decades.

In the 2000’s and beyond, Bart kept busy helping public housing tenants in the West End organize against the many problems in their homes, owned by Toronto’s largest landlord, the Toronto Community Housing Corporation. He worked closely with OCAP on several projects, including an ongoing fight back against oppressive zoning laws. With the Parkdale Tenants Association, he developed the ‘Golden Cockroach’, ‘Golden Weasle’, and ‘Lord of the Slums’ awards highlighting landlords’ and the City of Toronto’s indifference to stopping the deterioration of apartments in our City.

Bart was deeply committed to the activist nature of poverty law. He was able to relate and connect to people at a grassroots level, as well as engage law students with trainings on the history and demographics of the Parkdale neighbourhood, as well as provide mentorship to them during their training at PCLS. He played an invaluable role in strategic thinking, training and action at PCLS and within the clinic system on community development and organizing.

Most recently, Bart provided sage insights into the changing nature of legal aid services through the legislative reforms and budget cuts PCLS and other legal clinics experienced.

Bart is deeply missed but also remembered every day at PCLS and in the community as we continue to work on in the positive legacies he has left behind.

I worked with Bart in organizing the Parkdale Tenants' Association, which he headed and guided.
People came and went--I myself left around 2005, when I moved out of Parkdale to Toronto's east end-- but Bart was the one constant about the Tenants' Association, and I am in fear of what will happen, what has happened, in the wake of his passing.
May he rest in power, and his legacy live on.

[Tribute to Bart written in May 2020. Bart and I worked together as Community Legal Workers in the Tenant Division of Parkdale Community Legal Services on his first day at Parkdale Legal (I was on his hiring committee!) and for the next 25 years. They were exciting, volatile, hectic and rewarding years.

Bart often said his favourite feeling was "running on thin ice not knowing which direction would lead to shore." He was the master creating wacky and wonderful campaign themes to bring tenants together to fight against rent increases, gross disrepair, indifference , negligence and discrimination from City of Toronto officials.

The names of these campaigns cried out for publicity, public shaming of the target and often concrete change for the better.
The Golden Cockroach campaign (to find the worse slumlord in Parkdale).
The Golden Weasel (awarded to the City of Toronto for weaseling out of its enforcement of maintenance bylaws and urban planning responsibilities)
The Lord of the Slums campaign (that capitalized on the opening of the Lord of the Rings musical).
Building unity, morale and pride within the Parkdale tenant community was always a goal and I know those tenants who came out to marches, media stunts and celebrations will miss Bart keenly.
Bart was active in the Rupert Hotel Coalition formed in response to a horrible fire in a rooming house that killed 10 tenants. The place was sub-standard and fire alarms malfunctioned. The purpose of the Coalition was to get the City and the Province to create safe and affordable housing for roomers. For decades, Bart organized the Rupert Hotel Coalition's memorial on the anniversary of the fire, attended by survivors of the fire, poverty activists, reporters and politicians.
Bart was a charming, engaging person to all but angered by NIMBYism and enraged when some City planners blocked bylaw proposals which would have made affordable housing possible. They felt his wrath and saw his scorn and so did the politicians. Awarding City Hall the Golden Weasel Award ruffled feathers of planners and politicians alike. The Mayor ordered us ejected from the public square outside City Hall during our Lord of the Slums press conference.
Co-workers, reporters, tenants, other anti-poverty activists, held Bart in high regard. And those of us who knew him personally loved him.
Bart would show up at work on his bicycle by 1 PM or so, and usually stayed until midnight. The two of us would squirrel away in his office sharing personal stories, anecdotes, ideas and strategies. It was always special and always fun -- and also where ideas gelled, turned into plans and actions.
Bart was one of our union stewards and spent a sizeable amount of time helping co-workers in disputes with clinic management. It was soul-destroying and Bart was worn out from it but he loyally shouldered the burden.
When he and Zenaida, his love for many years, decided to wed, I was invited to the wedding. A few years later they attended my wedding (and Bart said "There wasn't a dry eye in the place -- even mine!").
Bart and Zenaida built a beautiful garden with a pond full of fish and he would often brings his vegetables and pears to the office for us. Zenaida often came to his rallies and Bart embraced Zenaida's family, both in Canada and the Philippines.
And here is where I'll end this tribute to Bart. He leaves a legacy through his enduring passion for social justice that touched the lives of so many people. Goodbye my friend.

Thank you Elinor. I was hoping to see you today, but alas.

I miss you Bart. You were a good man with a lot of class....working class! 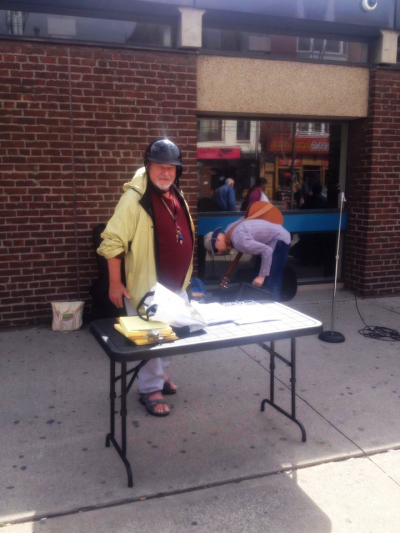 Former PCLS student - he was a zealous advocate.

Photo taken from ~ 2014 - March to Freeze the Rent. The Rent will be frozen next year - all it took was a global pandemic.

You inspired many fighters Bart. Thank you.

This man was a fighter who fought until he couldn't anymore. He deserves the utmost respect. Rest in power

Oz student, summer student and staff lawyer, I remember a street wise organizer, fervent activist and advocate. I worked on West Lodge, the skids, and other inspired projects with him. He is missed!

I was an Osgoode student at Parkdale for an academic/clinical term and a summer job. Bart was one of the paralegals who firmly believe we students needed to understand poverty as a political and personal situation. He could be brash, but he always had a sense of humour and an abiding respect for humanity. Rest in power, Bart. 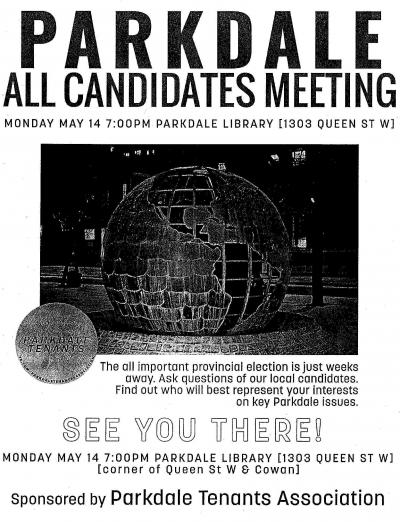 During the many, many years Bart worked with the Parkdale Tenants Association, one of our activities he was always passionate about was our all-candidates meetings at election time. He really understood the need for tenants to become a powerful voting force.
We had many good evenings over the years where the people of Parkdale engaged with the people who sought to represent them at City Council, Queen’s Park or the Parliament in Ottawa. Bart helped in so many ways to make those occasions successful.

The flyer you see here is from the last election Bart was with us. He was the timekeeper that evening and in his element. It’s a great memory to think of him keeping one eye on the candidates and the other on the audience full of Parkdale people he worked for and loved.

We are saddened to hear about Bart. We at the Renfrew County Legal Clinic wish to send his family and friends our condolences. Bart’s commitment to tenant advocacy is close to my heart. Advocates like him laid the foundation for the rest of us to continue to push for justice for low income residents. May he RIP.

As unpredictable as Bart's office hours might be, everyone knew from his unmistakable laugh when he'd arrived in the L&T Division's workspace. It was impossible not to respect the passion he had for the issues facing working class tenants and all those seeking safe housing in the community, whether he was discussing them with tenant association members, local politicians or other advocates. From teaching clueless law students about rooming houses, to keeping the focus on the need for real rent control, to reviving the "Golden Cockroach" award, Bart brought people together and helped shine a spotlight on things that might've gone unseen or unchallenged. Thank you, Bart. You will be missed.

My memories of Bart go back to when he spoke at the various Clinic Training sessions on Community Organizing. I remember how shared his experiences at organizing the tenants in the various buildings in Parkdale. I distinctly remember him saying "You just have to get down and do it". He will be missed.

​For anyone who knew Bart Poesiat - and for those who didn't know Bart Poesiat. He was one of the great tenant organizers back in the day, and his efforts should be remembered. He was a tremendous character as well, and I will miss my visits with him at PCLS in more recent times.

I had the pleasure of working with Bart many years ago at PCLS - at the time, I lived in Parkdale as well and have fond memories of seeing Bart in the neighbourhood. I remember his Golden Cockroach Award for bad landlords in the catchment, as well - which I think has been carried on by recent PCLS staff.

I'm sorry that I wasn't able to say goodbye to Bart, He was instrumental to me early in my career in terms of thinking and talking about tenant advocacy.