Peter was born in Thame, Oxfordshire where he lived and worked for most of his life. He attended Lord Williams’ Grammar School, and later when his sons also went to the school, he joined their board of governors. He left school early to work in and then run the family business, which he did for over 40 years. He continued to take A levels through evening classes and embraced learning throughout his life.

Peter developed the family business from a small butchers to a large fine food and wine shop. He was very knowledgeable on cheeses, coffee, tea, wines, and fine foods from around the world. He always researched his products, knew their provenance and would give talks locally on them as well as hosting tasting events. He was well regarded as a local businessman and made many friends. He was also well known and respected as an accomplished and enthusiastic Bridge player and teacher. He enjoyed sharing his knowledge and bringing the pleasure of the game to many people.

Peter eventually sold Jordans’ Delicatessen but remained a supportive landlord to a small group of businesses at the premises which include Rumsey’s café which now occupies the space where his shop used to be. He then went to work for the English Bridge Union (EBU) and from that moment on he never felt that he was working. He just enjoyed what he was doing so much. He loved getting to know the members of the EBU who he thought of as friends. He grasped the opportunity to develop the role of competitions secretary including: running the overseas congresses; being part of the tournament committee; working with the annual Lords v Commons match; managing the annual congress in Brighton; and working on the “Really Easy” bridge weekends. He enjoyed the company of his colleagues and missed their daily interactions when he retired.

In his homelife Peter enjoyed spending time with his wife Barbara, his children and five grandchildren and their many friends. He enjoyed theatre and he was passionate about opera. He following all sports avidly having participated in many sports including table tennis, squash, cricket in his earlier years, he was also, until his stroke, a very enthusiastic skier. Peter was a lifelong Arsenal supporter and made very good use of his season-ticket. He also took part locally, in many of Towersey village’s amateur dramatic productions ranging from pantomime to cabaret to reviews. Peter was friendly, kind, hard-working, and above all else enthusiastic about everything he did.

Having known Peter since I was about 4-5 years old, he was a perfect gentleman. As very close friend to Tim in my early years and living very close to the Jordan Family I basically lived at the lovely family home on Croft road !! Peters passing is very sad and he will be missed by all. Reflecting on nothing but positive notes my child hood memories have all come flooding back , the tree house at the bottom of the garden , secret fat to the health centre ( just a gate !) the football goal that they Peter put up for the Boys and certainly not to forget the snooker table in the loft where Peter would come and play with me and Tim . Also recall Peter taking me and Tim up to Highbury to watch his beloved Arsenal play , I was only very young but can still remember it so well going up in his Volvo estate. I seem to recall Peter always having a Volvo. My thoughts at this very sad time are with Barbara , Tim , Sam and Ben, but Peter was a man you can be extremely proud of and was one of the kindest people I have met, I am glad I had the pleasure of knowing Peter like I did , lots of love Jason ( or as I was known and always Bishy B )

Sending much love to Sam, Cat and all of Peter's family & friends! Our hearts break for you. May all the memories of him be a huge blessing during this time and forever. Hugs & love- Alison, Brett & Quinn Howlett xx

Very sorry I have only just discovered Peter has died
So sorry Barbara. He was the perfect, charming gentleman at all times and will be much missed
Deepest sympathies 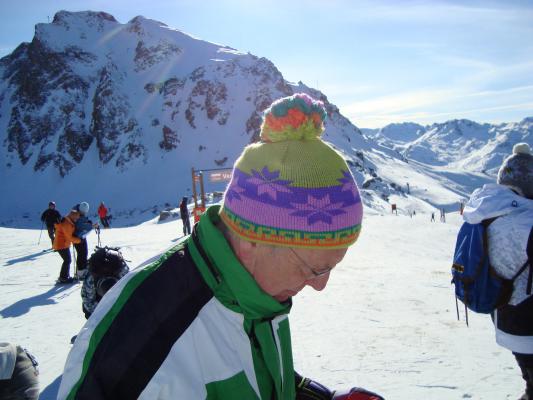 What a great holiday we had with Peter and Barbara In 2009 - We went skiing in a large "family" group - as it seemed like we were all one family. Lots of laughs, food, wine and skiing. A lovely man.

It was a pleasure to have known Peter for many years as our landlord. He always had time for a chat, was interested in how my business was doing and keen to help however he could. And of course, always with a smile and good humour. You will be very sadly missed Peter.

I first met Peter 47 years ago when I called at ""Jordans of Thame" through business and over the years we met socially playing cricket at South Oxon Farmers (oh the teas were fantastic) and going to Lords. Peter always had a humorous, positive,and engaging personality. Lynne and I will always have fond memories of our times together with Peter.

Sandra and I first got to know Peter through our membership of Oxford Bridge Club, where he and I both used to direct on occasion, as well as at other Bridge events and, of course, on the phone when we made our bookings with the English Bridge Union. He always impressed by being cool, calm, efficient and cheerful. When I myself joined the team at the EBU, somehow or other we ended up making a team-of-four with Peter and one of his partners to compete in various knockout competitions, usually hosted at someone’s home. We always looked forward to Peter’s excellent choice of cheeses if the match was at Towersey. Our fearsome foursome didn’t usually manage to progress to anywhere near the finals, but we always gave it a good shot, and there were no recriminations when either of us made a mess of things.

Even after he had his stroke, his memory for past events and people he had known was as good as ever, and his sense of humour did not desert him. The bridge sessions Barbara organised for him may have sometimes been a little chaotic, but we all enjoyed a good deal of fun and laughter.

We will miss him. Krys & Sandra