It is with great sadness that we announce the passing of Dr. Kazem Amoli on 11 October 2020 in Tehran, Iran after a courageous battle with post-surgery complications.

Dr. Amoli, a renowned and multi-award winning pulmonary specialist in Iran, worked tirelessly into his early 90s, pursuing his passion to treat patients, teach future generations of doctors and specialists and continue to learn and keep up to date with developments in his field of expertise.

His medical career began in 1946 when he entered Tehran University of Medical Sciences having achieved the highest entrance scores in the country. He graduated in 1952, gaining first place and began working and teaching in Mashhad Medical School.

His passion for pulmonary medicine gained traction while working at the late Dr. Shaghaghi's clinic for respiratory and TB patients from 1956 to 1960 in Tehran. Dr. Shaghaghi remained his mentor and friend, inspiring Dr. Amoli to continue his studies in this field.

In 1960, he travelled to the United Kingdom where he pursued studies in respiratory diseases at the University of London, working in various hospitals throughout the UK, including Brompton Hospital in London and Manchester's Withington Hospital.

Upon return to Iran in 1962, he continued practicing, teaching and researching for five years. In 1967,  he traveled back to the United Kingdom to study for Diploma in Tuberculosis and Chest Diseases (DTCD), graduating from Cardiff University, Wales in 1969 with first class honours while also working in several hospitals in London, Liverpool and Cardiff.  Dr. Amoli spent two years working in Papworth Hospital, a world renowned centre near Cambridge, famed for treatment of tuberculosis and chest medicine, which later became known as one of the world's pioneering hospitals for heart and lung transplant.

Back in Iran, Dr. Amoli set up his private practice from 1971 and continued treating patients throughout until October 2019.  As Professor at the Tehran University of Medical Sciences' Imam Khomeini Hospital, he was instrumental in training countless doctors and specialists, a prominent member of the specialist board of exams.

The Pulmonary Diseases Wing of Imam Khomeini Hospital was established through his efforts and was where he conducted rigid bronchoscopy, a highly specialist procedure. In 1974, he pioneered fibreoptic bronchoscopy in IK Hospital for the first time.

In treating TB patients, he adopted short term treatments of 6 and 9 months with great success.

In 1976, he discovered 20 types of live housemites in the Caspian Sea region in Iran, one of the main precipitating factors in asthma, working closely with UK's A.M Cunnington to publish his discovery in the Journal of Clinical and Experimental Allergy in 1977.

In 1991, he established the Society of Pulmonary Disease Specialists in Iran with 22 members when founded and now with a high membership that continues to increase.

In 2010, he published research on Sarcoidosis in Iran based on 310 cases from among his patients and was a pioneer and authority on knowledge and treatment of the disease in the country, while also sharing his findings and experience internationally through the World Association of Sarcoidosis and Other Granulomatous Disorders (WASOG).

His study of the impact of indoor smoke on Iranian housewives in rural areas and miners and labourers in brickmaking factories was brought to his attention through bronchoscopies conducted on his patients, and this led to extensive research, a published paper in the European Respiratory Journal and various presentations at international conferences.

Dr. Amoli was an adventurer at heart and had a zest for life, travelling, learning, friendship and family.  He conquered Mount Damavand (5,610 metres) twice in his youth and travelled the four corners of the world extensively.

He had a passion for his profession but mostly valued helping his patients and always advised his students on respecting the patient the minute they walk in and throughout treatment.

Despite retiring in 1995, Dr. Amoli continued to attend and conduct weekly lectures on pulmonary physiopathology and clinical approaches enthusiastically and treated patients at his private practice four days a week, until a fall outside the lecture hall and a fracture to his femur in 2019 stopped him from being able to continue.  Many of his patients considered him a friend and family member and maintained contact well beyond their treatment.

Dr. Amoli was a member of the following bodies:

- World Association of Sarcoidosis and Other Granulomatous Disorders (WASOG)

His work involved extensive research based on his direct treatment and engagement with patients.  A few of these include:

He is the author of several books including:

And a contributing author to several books published in Iran on pulmonary medicine.

He leaves behind his wife of 60 years, Fatemeh, two daughters, Shahrzad and Shirin, two grandchildren, Ashkan and Kiana and a great-grandson, Ryan.

He will be missed but never forgotten. 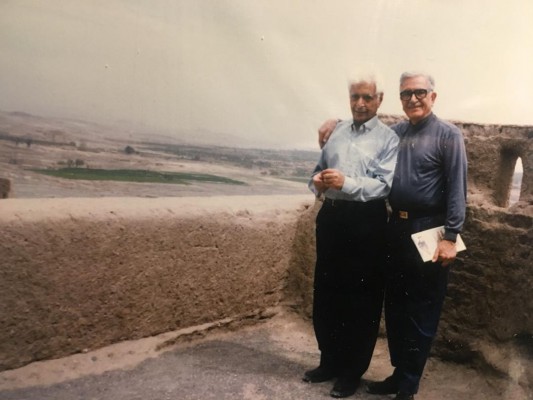 Dr. Amoli once said he had a list of 100 best friends, all of whom passed before he did and he had to endure the loss every time. Their friendships were unique and preciously deep. One of these best friends was Dr. Abolhassan Zia Zarifi, the most sweet, witty, remarkable scientist, philanthropist and role model one could hope to have crossed paths with. Here's a photo of them during one of many many trips they would take together (March 2006, Syria). May they both rest in peace and we'd like to think they still stand by each other's side and enjoy each other's company. 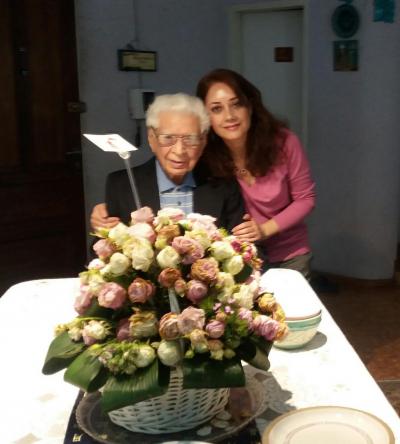 I have hesitated so far to write about my father as I am still in the process of struggling with the sad reality that he is not among us, albeit physically. My dear father, Dr. Kazem Amoli , will never cease to be the center of my universe. I will always feel blessed for his guidance, his words of wisdom and his compliments with which he showered me , particularly at times when I felt down and worthless.
His motto in life was "I feel that every new day that begins I am born again , as if it is the first day of my life and a fresh start to live and learn " and his incredible love for life and extraordinary passion for learning made him the beautiful human being that he was.
Rest in peace Baba joon
Heaven is without doubt a better place with you in it ❤❤

Dear Shirin
Please accept my warm and deep condolences. I had a chance to meet him just once and I found him very kind, welcoming, and respected. I know it’s tough to deal with this kind of tragedy, but there’s no other choice. Let him rest in peace.

In 1968 I was working as an SHO in Cardiff. I met the late professor K. Amoli ( Kazem ), for the first time, in the canteen of the old Royal infirmary, Cardiff. I am eternally grateful to another colleague who introduced us two. Later on, after a few social meetings, Kazem invited me to a supper to meet his family. Through the auspices of NHS he had rented the  first floor of a large house in a rather remote but beautiful rural area.
The invitation, which was meant to be confined to supper only, unexpectedly extended to two complete days & nights. We were bogged down by one of the heaviest snows recorded in years. Heavy snow, compounded by snow drift, made the roads unnegotiable &  my mini minor parked in the corner of the yard was almost totally covered. The adverse climatic conditions disrupted active work including lots of hospital & clinical duties. However, the difficulties did not affect the Amoli’s warm hospitality & Fati Jan’s ( Mrs Amoli’s) delicious cooking throughout the period. Ever since, Kazem and I remained in close contact as friends. Later on, after my marriage, both my wife & I were Dr & Mrs Amoli’s  guests over a weekend when he worked in the old Royal Papworth Hospital, near Cambridge. Although I never worked in Iran, myself, during my visits there, I met Kazem frequently even sometimes at his surgeries. As such, I know not only of his hard work & dedication to medicine whilst in UK, I am fully aware of the extent of his contributions in that field in the more needy country of Iran.
Kazem (Dr K Amoli) was totally dedicated to his noble profession. Academically in terms of research into respiratory medicine, teaching, and more significantly, in his care and attention to his patients, Kazem was exemplary.
He practised medicine in the most genuine classical sense and followed the Hippocrates Oath to the full. He achieved all these ideals in the most courteous, calm and composed manner.
In short  he was an inspiration to all of us
May his soul rest in peace.
Dr Shahrokh Shahriari

Rest in peace dr Amoli, we were saddened for your lose.

knownig Mr and Mrs Amoli and having them in my life was ,is ,and will be one of the greatest gifts that God gave me. They are angels that protected me ,loved me and taught me how to live. they were a reason for me to fight, live and keep going.
I still can't beleive we lost him. He was not just a doctor of mine , not just a person who I alwayes looked up, but a teacher and like a grand father to me.
My whole country lost a fATHER .
I know this loving family for more than 20 years. since i was 5 or 6. as a kid I always used to think if i survive, I'm gonna be a person like Mr and Mrs Amoli.
I miss him so much but I know we are going to meet again. sooo... not a good bye.

I first met Kazem in the late 1970's when Shahrzad and I were both students together at boarding school and he had made a brief visit to the UK from Iran. Three years later, we met for the second time at Brompton Hospital, London. Shahrzad had mentioned to Kazem that I was starting my first ever job and, being in the UK at the time, he had arrived unannounced and asked my boss if he could take me out for lunch on the first day of my new job. Being miles away from my own family who were in Hong Kong at the time, and feeling nervous on my first day of work, this extraordinarily kind and gentle man helped make my day that much easier and it is a memory that is extremely special to me and one that I have always treasured.

My thoughts are with Fati, Shahrzad, Shirin, Ashkan and Kiana at this time and I will always hold my memories of Kazem fondly. 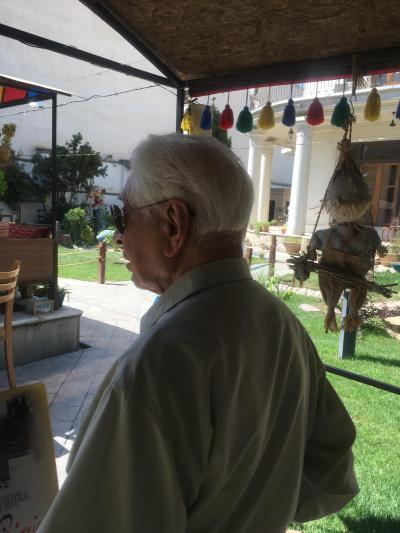 Just one of thousands of photos and memories of dear "Baba Kazem'. The Rabbani family are thinking of you Fati joon, Shahrzad joon, Shirin joon, Ashkan joon and Kiana joon xx Devastated at the loss of our dearest family friend, whom I've known all my life. The world is a sadder place without the most brilliant, wonderful Dr. Kazem Amoli. Deepest sympathies to the whole family x