My husband Tom and I live 2 houses away from Chuck. We live next door to Jim and Michelle Schagg (Lucky's new parents). i retired from the Law Firm of Robinson, Calcagnie & Robinson in Newport Beach. I worked there for 20 years. Chuck and I shared lots of stories about different litigations that we worked on. Before he got Lucky he thought about getting 2 dogs!. I told him that might be a bit too much and he said I was right after he got Lucky. He was a great friend and neighbor. We will miss him.
Francine Teer

Chuck and i have been friends for 65 years! we grew up one house away from each other. we were constantly outdoors playing at something. no computers to keep us inside.we each had our dogs and they also were best friends, his being scamp and and mine being friskey. we both loved going to the movies especially the drive in theater near us.chuck had a huge comic book collection a couple thousand at least, when he went to college on long island his father donated them all to the salvation army, Chuck wasn't mad though he said he hoped others would enjoy them like we did .we spent rainy in his attic reading them .he also liked music and had a nice record collection. we stayed friends all those years always in touch wherever we were in the usa.we did not see each other for several years but we knew were each of us was .he would call every xmas! I am back in the family house on the same street and think of Chuck all the time i pass his old house.I miss him now and will till i see him again!

It’s wonderful you kept in touch all those years. ❤️

Here is a couple of pictures i found of Chuck, one is him lifting my sister and the other him lifting my brother, Chuck always like to show how strong he was!

These are great. Thank you for sharing. 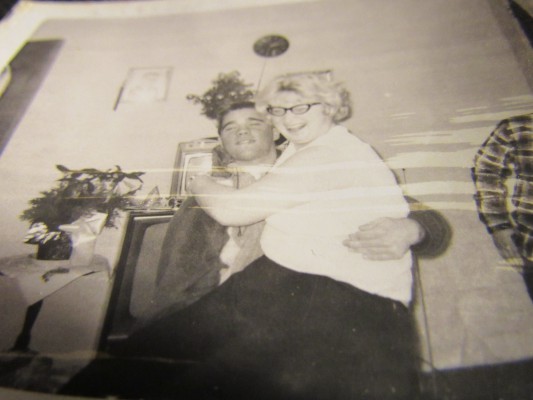 Chuck and my sister

Linda grew up with Chuck (as she knew him) in the same neighborhood. Her parents were quite popular with several kids and they would host card playing parties. Even had a clambake for all the kids one time. Chuck's Dad was a fine fellow named Fred. Fred was always the organizer for softball games with the kids, and would always take part in every game. He was always fun. Linda remembers him yelling things like "Watch out for that bicycle!" when she was trying to catch a fly ball.

I knew him as Charlie in high school. We were in the same classes throughout. So there were many shared experiences. He was fun. After Charlie & I graduated, Linda & I met, and Charlie & I took much different paths. We graduated from Chenango Forks High School in 1966. After that, I really had no contact with Charlie for 55 years! Only in the past year did he initiate contact with emails. The Viet Nam War caused us to go different ways at that time in our lives. Linda & I remember him as a good fellow who always a good time. Bill & Linda Artman

Thank you for sharing these childhood memories with us, Bill. It’s been wonderful hearing these stories.

Chuck started out as my boss & turned into one of my closest friends of my life. He knew everything about what was going on in my life and my daughter’s. He was never judgmental and one of the best listeners EVER. He was always there to listen, to share tears and laughs and be a huge supporter. He loved movies and enjoyed food of all kinds and every Christmas he would send gifts for my cats because he knew how much I love them. He would try a new food and call me to share that I would love what he had tried. He cherished his friendships. I will miss him very much. He was rare.

I had the pleasure of being Chucks neighbor for 4 yrs across the street and we had the best time with him.
RIP CHUCK

I shared Chuck’s passion for History and Movies. He rekindled my passion for history about 15 years ago by giving me numerous recommendations of books written by ancient authors, and by persons who lived and experienced the historical events that they were writing about, which are my favorite. He knew more about history, whether ancient or modern, than anyone I know. He likewise knew more about movies than anyone I know, and had a collection numbering in the tens of thousands. It was hard to find a movie to give him as a gift, that he did not already own. But I was able to surprise him one time with a movie about his hometown of Binghamton, New York. I once told him about a Sci Fi movie from the 50’s about Earth after a nuclear war that had an impact on me at a young age. A few days later it was my turn to be surprised when a DVD of that movie arrived at my house, courtesy of Chuck.

I will miss Chuck, but am thankful for the time we had together, and how he enhanced my life.

Thank you Jeff. I had the same challenges in trying to get him gifts for his birthday or Christmas as he had everything. He loved giving us movies and then asking for a review. Regarding history, back in the 90s, he would give me and some other staff, world history lessons during our lunch break. He loved teaching. I really miss him.

I met Chuck in 1978 in Washington DC. I was pleasantly surprised after moving from the DC metro area to LA to find out from mutual friends that he was also living in LA. Some years later it turned out that he and my husband were working together at Baum Hedlund.

Upon first meeting him, I was immediately impressed with his quick wit and interest in many things. He was about 10 years older than my callow 20 years, but did not speak down to me, and was always friendly and talkative.

Jeff and I visited him a number of times after he retired, and spent many a happy hour talking with him and playing with Lucky.

His inquisitive nature, his ability to be observant, his interest in discussing history, including how we should learn from it, all made him a fun and interesting companion.

Chuck, you are missed. Jeff and I are so glad you were our friend. I’m grateful that we got to convey our love and appreciation for you to you before you passed. Rest In Peace, friend.

The first time I met Chuck was in 2019 at the pool here at SDV/ When he wasn't in the pool doing laps without making a ripple, he was reading some historical book. Little did I know at the time that he had entire rooms in his house filled with books and videos. Soon after, I was also a recipient of a [very long] movie from his collection he wanted me to watch and critique.

You could tell where Chuck and Lucky were on their walks by the number of tails wagging waiting for the treats he always kept in his pocket. My dogs, Max & Stanley were no exception. One time, he came over to pet sit for a few hours and brought a book with him to read. This is what he wrote in a December email: "Please pet Max for me, and give a fond ghostly pet to my friend Stanley, whose paw on my hand to close my book I'll always remember." This was the first I knew that had occurred. That email was sent on December 23rd. Just one example of Chuck's kindness and caring, as he knew how much I missed my furry friend.

Not long after I met Chuck, he said not to look for him and Lucky on Sundays. I never knew why until much later. It was to visit with and help a lady who lives here - a commitment he kept until his illness simply wouldn't allow it.

Finally, one day this summer, I passed by Chuck's house and his car was parked in the driveway. It was a flashy sporty car in an incredible neon-like color, but I couldn't tell what make it was. I emailed him to ask and said maybe one day he could he could take me for a spin. He remembered that and lo and behold we went for that spin. Little did I know it had a sound system that would blow you out of the car. That was one of Chuck's good days in November and we had the windows open and the sound up as high as we could get away with!!

I realize that the posts here are from those who knew Chuck far longer than I. However, it didn't take long for me to recognize a man who truly cared about his friends.

I'll always miss you, Chuck and will think of you whenever I pass a McDonalds, the Golden Ginger, King Kabob or the Rockin-K-Steakhouse, run into Lucky or pass by your house. Thank you, my friend, for making my world a little brighter.

What a fun and wonderful memory Carol!

Chuck was a good guy. We talked often when we saw each walking dogs and we rarely agreed on current events. But his conversations were intelligent and respectful and I appreciated that.
And he was a great lover of food, like me, so we talked about local restaurants.
And his sense of humor was terrific