Muhammad Ali, the world's greatest boxer, sportsman and orator passed away on June 3rd, 2016 at the age of 74. Born Cassius Marcellus Clay Jr. in Louisville Kentucky, Clay grew up with a love of boxing and would go one to become one of the most decorated boxers in history and helped change the course of American race relations in the process.

Clay was a feisty child who was quick to anger. He found his way to amateur boxing after police officer Joe E. Martin convinced an angry Clay to try his hand at the sport. In 1954, at the age of 12, Clay began his amateur career, winning six Kentucky Golden Gloves titles, two national Golden Gloves titles, an Amateur Athletic Union national title, and the Light Heavyweight gold medal in the 1960 Summer Olympics in Rome. Impressive for someone so young.

Clay professional career (1960) started with a few bumps and missteps. Clay would be knocked out, criticized for his plain speak and awarded disputed victories. Yet these early problems also helped Clay create a name for himself. Clay's first big fight against Sonny Liston was a knockout victory for the young fighter. Liston, whom Clay called a "big ugly bear" before the match was no match for the speed and intensity of Clay. Clay quipped to the media about Liston: "After I beat him I'm going to donate him to the zoo." Clay was blacklisted from professional boxing for 4 years for refusing to fight in the Vietnam war. Clay was an active resistor who would speak at college campuses and public rallies. Known for his fast-talking and light-step, Clay would go on to defeat some of the biggest names in boxing, retaining his heavyweight championship for years to come.

Clay's personal life was as interesting as his ringside personae. Clay grew up with four brothers and a sister and was very close to his family. Ali was married four times and had seven daughters and two sons. Many of Clay's marriages ended as quickly as they began. At the time of his death Clay had been married to Yolanda ("Lonnie") Williams since 1986. Clay courted the Nation of Islam (NOI) early in his career and converted in 1964, being renamed Muhammad Ali by the NOI spiritual leader Elijah Muhammad. Always interested in Islam and spirituality, Clay converted to Sunni Islam in 1975 and then Sufism later in life.

Clay's health began declining several years ago with shorts stints in and out of hospital. On June 2nd, 2016 he was admitted to a Scottsdale hospital with respiratory problems. His conditions worsened and by the end of the next day, Clay was declared dead. 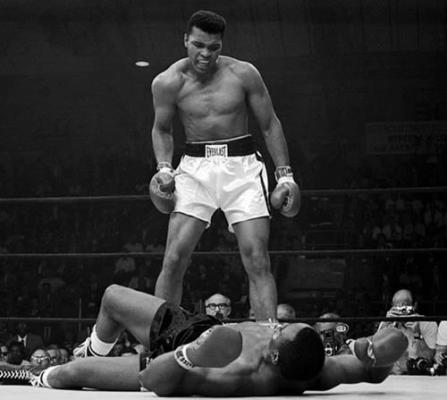 I remember watching you fight when I was growing up. You inspired me so much. RIP...